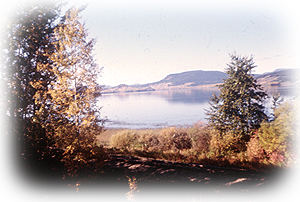 ‘Usdas and his two wives, Tsah the beaver and Tsek’et the muskrat, traveled by canoe, all the way around the great Lake. While his wives paddled, ‘Usdas landed and walked along the shore, looking for signs of his younger brother, Yus the wolf. At last, he found a place full of foot prints. They were the foot prints of ‘Utnaneyaz, the little dwarfs, as they played with a ball made from the skin of a wolf. It was all that was left of Yus!

‘Usdas transformed himself into a stump, and planted himself near where the ‘Utnaneyaz were playing. The ‘Utnaneyaz were suspicious of the strange looking stump, so they brought out a serpent, which coiled itself around ‘Usdas. The boy didn’t breathe or move a muscle, until the serpent uncoiled and said, “It’s a real stump!”

That night ‘Usdas killed the ‘Utnaneyaz as they slept, and gathered up his brother’s bones. He put the bones inside the wolf-skin and jumped over it twice. But it didn’t come back to life. Instead, it just wiggled around like a worm! Then he noticed that he had missed a few tiny bones, which he put back inside the wolf skin. This time he jumped over it twice, his brother, Yus came back to life!

Then ‘Usdas set out in the magic canoe with his two wives and baby brother. Soon, however, they noticed that the water was beginning to rise. It rose higher and higher unitl the whole world was flooded, even covering the highest mountain! It almost touched the sky, until ’Usdas struck at it with his long knife, and the water stopped rising.

‘Usdas shaped the mud with his hands and blew on it twice. Then he asked his brother, Yus the wolf, to go out onto the mud to see if the world was ready for men and animals to inhabit.Yus told his brother, “If I come back silent, you will know that then world is not ready. But if I howl from very far away, you will know that all is well with the world!”
So Yus wandered off, and was gone for a long time. But he came back quietly. The world is not ready. Twice more, ’Usdas blew on the mud, and the land grew larger still, and the trees and grass began to grow. Yus wandered off again. After a long, long time, ’Usdas heard his brother, the wolf howl from far, far away. ‘Usdas had remade the world, and it was ready for men and animals to inhabit again.